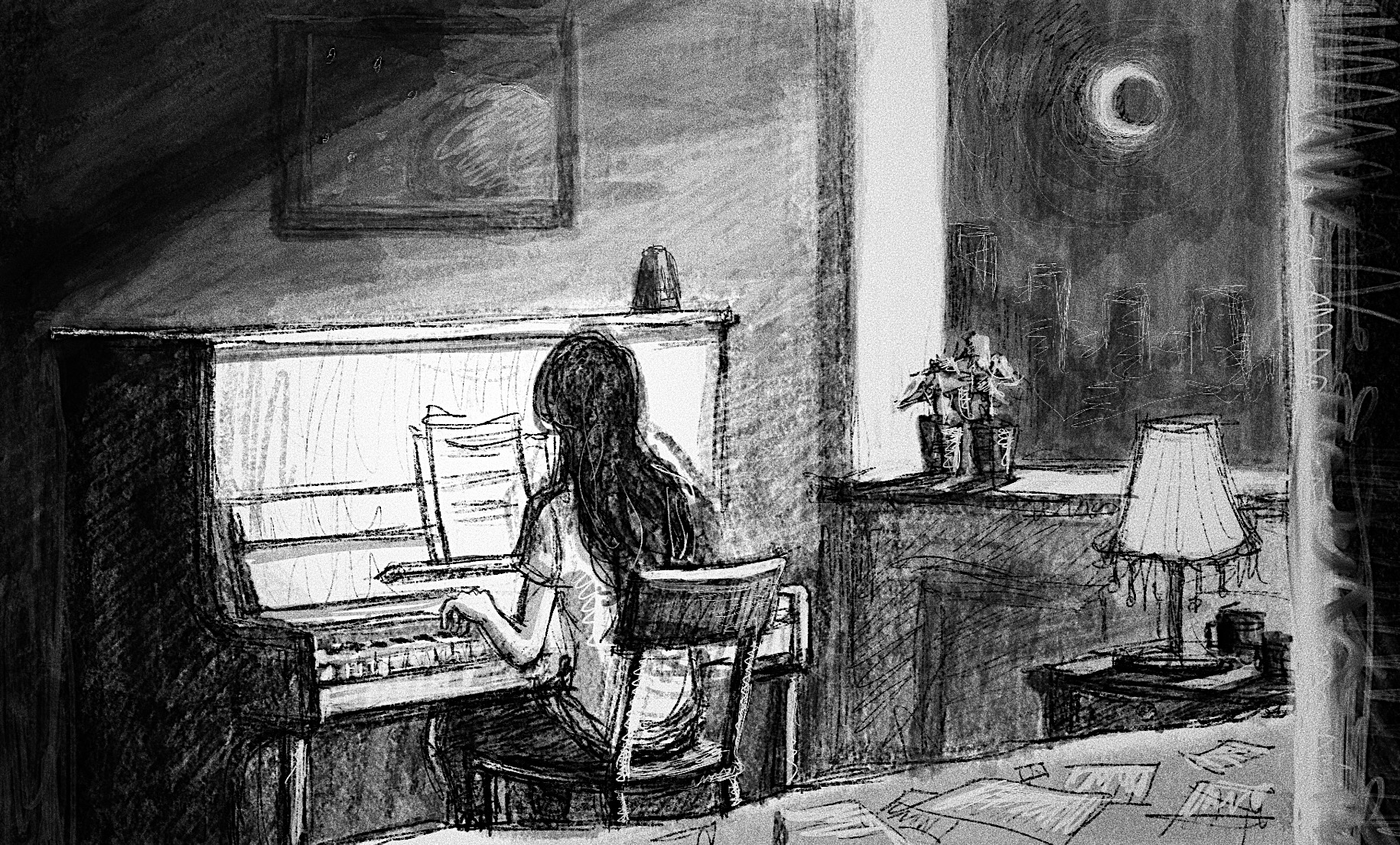 Every night I pray. Please let tomorrow be different from today. After cleaning up the back of the music room, I went back to the homeroom. Nobody was there. My classmates’ desks were scattered with their school ties, skirts, and uniforms. I rushed to my locker to get changed into my gym uniform, but it wasn’t there. I checked inside my bag and even shook out my shoe pouch. It wasn’t there. I even checked the shopping bags that were hanging off of my classmates’ desks because it looked like they were lumpy enough to have clothes in them. None of them were mine.

I felt relieved knowing that none of them had my name on it. Desperately, I checked my locker once again, but still nothing. I started panicking. Time was running out, and the bell was about to ring. I had no choice but to run out to the schoolyard in my school uniform. While running, my cell phone fell out of my pocket. I noticed the scowl on my gym teacher’s face.

As a punishment, I had to do one hundred jumping jacks before practicing for baseball. My body was not functioning correctly, like the way I wanted it. I even tried to follow what my teacher had instructed, but the bat was too heavy for my arms. My legs were shaking and couldn’t hit the balls coming my way. I was carrying too much of the bat’s weight on my shoulders, making my posture look stupid and awkward.

I heard snickering coming from the back.

“She is so weak at everything that she does.”

I even heard some people bickering at me. Everyone else was hitting the ball wearing their regular navy colored gym uniforms, and here I was like a broken machine, out of place, and out of line.

Below the bat, my skirt was flapping around. My face turned red, embarrassed as if the wind had lifted my skirt. As soon as the gym class ended, I ran to the bathroom, locked the doors, and cried without trying to make any sound. I wasn’t expecting anything marvelous. I just wanted to experience a day that felt extra special.  Is there someone up there really listening to me? Or am I just praying for something impossible?

I was so nervous the night before meeting at Jieun’s house to discuss our group assignment. For our science class, our teacher asked us to make up a song and lyrics for our performance assessments. Our group decided to meet after school, but it always ended up where everyone got distracted, fooled around, and talked about their issues. Well, everyone except me, because people like me are different from others. I needed to take extra measures to be careful so that I don’t end up sticking out like a sore thumb.

When everyone else was talking about the new celebrity gossips and the hottest K-Pop songs, I would be in the back, quietly drawing while listening to The Beatles and Coldplay through my headphones. Because I wasn’t a part of the majority of the group, I felt alone, and my self-esteem would naturally decrease. I have never really revealed who I truly was in front of them.

However, my group members were friendly, and I was able to get along with them. I think it’s because of the time when I played on the piano. I saw one and immediately sat down and played on it without any hesitation. Rather than the redundant hit songs that are often overplayed, I improvised and played like I usually enjoy doing when I am by myself. When I came to my sense, I quickly shot out of the chair, making it drag against the floor. I must’ve looked stupid and awkward.

But rather than laughing at me like I thought my classmates would, something unexpected happened. They asked me to play some more. I have never received this much attention in years of not just middle school, but my whole entire years of attending school.

Starting from this point on, will my life in school become different? I got a good feeling about this, and I hope that I am not wrong.

I stayed up all night to write a song. I even made a tune with the guitar to go along with the piano. I let my friends listen to it, and they liked it. It’s silly, but I sort of felt like a superstar. On the day of our performance, while waiting for our turn, I kept imagining this scenario in my head.

After finishing my song, all seventy-two eyes from the thirty-six heads will be looking at me with their mouth open.

Just thinking about this made me thrilled. I prayed wholeheartedly, gathering in the power of the universe. I clapped loudly when other groups had finished performing, but in my head, all I heard was the repetition of my song.

Finally, it was our turn. I popped the CD inside the computer and joined my group on stage. As soon as we finished performing, the entire room erupted in applause. My teacher liked my song and wanted to know who wrote it. I felt bubbly inside and couldn’t stop smiling.

As I opened my mouth to answer, the girl next to me shot up her hands and said that she made the song. My teacher asked questions about how it was made, and if she played the instruments herself, and eventually said to the girl that she was extremely talented. With my mouth still gaping open, I stayed frozen, looking stupid and awkward.

This girl didn’t just take away my credit by deceivingly saying that the song was hers. She took away the joy I had while I was creating something that belonged to me. She took away all the expectations I had in hopes that this could somehow change my future. She tore and obliterated my chance of becoming an ordinary middle school student with friends who will listen and relate with my interests. I felt excruciating pain as if something vital had fallen out of my body.